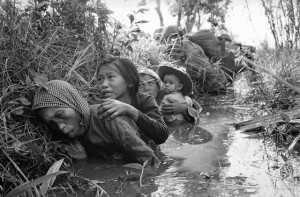 I’ve been reading through a few books that talk about Christian living, and I’ve seen some recent articles popping up about Christians and the use of violence (I am using violence to refer to intentional injury or killing). It’s really made me consider some of my past views. My past perspective was for the death penalty (like any good Texan), for self-defense, and for the war on terrorism. I wrote an article on The Death of Bin Laden, which was a start of my train of thought towards violence, but I’ve recently been reconsidering nationalism, and our violent world.

I picked up a copy of Fight: A Christian Case for Non-Violence by Preston Sprinkle, and it has been a really good read on the topic of Violence. I recommend it to anyone wanting to dig further into the topic. Preston goes through many sections of the Bible and discusses violence in it’s various aspects. He goes through Israel’s history of war and killing. God tells them to drive out and fight against the Canaanites, but we see that when Israel tried to fight the war, they failed, but when they trusted God to fight, they won. When David tried to do a census of fighting men, God punishes David for relying on their national strength instead of God.

The book also covers the life and sayings of Christ. The greatest example is Christ and his life. When being arrested, He told Peter to put his sword up, and went willingly. When being spit upon and beaten before being crucified, He never resisted. Instead of calling down the angels to destroy those doing harm to Him, he was silent, and even prayed for forgiveness to those doing Him harm. In His teachings, he tells us to love our enemies (Matt 5:44). He tells us to turn the other cheek (Matt 5:39), and when asked to go one mile, to go two miles (Matt 5:41). He says if someone sues you for your tunic, give them your cloak as well (Matt 5:40).

Preston claims that he hasn’t arrived at a final answer, but goes into the topic of defense with violence, and military service. Defending yourself with violence, he claims, isn’t black and white. We know that there are no biblical examples of self-defense. It might be allowed while defending your family (who is your neighbor), because loving your neighbor may trump loving your enemy. Military service that involved killing was never allowed by the theological writings from before the time it was made the state religion in Rome. A position in the military that does not involve or support killing is one thing, but the early writers seemed to agree about military violence was something a Christian should not participate in.

Our allegiance is to Christ, and our kingdom is the Kingdom of God. We have no interest in furthering the kingdom of America. Romans 8:37, 39 says it well:

Who shall separate us from the love of Christ? Shall tribulation, or distress, or persecution, or famine, or nakedness, or danger, or sword? No, in all these things we are more than conquerors through him who loved us.

Is our allegiance to America? Is our trust in national security, or police protection? Where is our Faith when those things don’t exist (such as third world countries)?

If someone breaks into my home, I don’t know if I can stand by and let the intruder do as he wishes, but I think with the words of Jesus, as Christians, we have alternatives to shooting the intruder. Is my faith strong enough to submit in hopes of making a difference in the intruders life? I honestly don’t know.