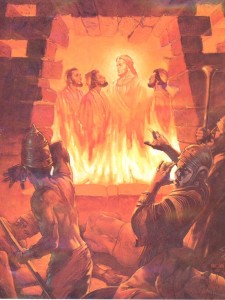 Nebuchadnezzar was a very powerful, and very bad man. He captured many nations, and was responsible for the death of many as he conquered the people of the middle east. I would compare his acts to those of Hitler or Stalin to the people of his day.

However, Nebuchadnezzar was an instrument used by God, and God even call him, “my servant” (Jeremiah 27:6).

In Daniel 3, Nebuchadnezzar had a golden image set up, and all of the nations were commanded to bow down and worship the idol. This idea was against what the Jews were commanded, and Shadrach, Meshach, and Abednego refused to bow down to this image. Nebuchadnezzar became so angry that he ordered the furnace to be heated to seven times it’s normal temperature, and he had them thrown in. The fire was so hot, that those that threw them in were killed due to the extreme heat. God saved Shadrach, Meshach, and Abednego.

Today, we have those in the brotherhood who would choose to drag down and point out others, instead of focusing on our own shortcomings, improving our own walk, and on building up the body. When we are so caught up in dragging others to hell, whether it be individuals or as a group, we are only right outside the gates. Just like the Babylonian guards, we too will be burned up if we are not careful. It is not our place in the body of Christ to study about how others are doing it wrong. We can study the truth in God’s word, without pointing fingers that degrades others.

Jesus tells us, “Why do you see the speck that is in your brother’s eye, but do not notice the log that is in your own eye?” (Matthew 7:3). We all have sin (Romans 3:23), so what gives us the right to put others down when we are imperfect ourselves?

Paul, Peter, and Christ all call out those who do wrong, but in all circumstances that I have researched, it is directly affecting that specific group that is being addressed. Sitting in our building and pointing out the theological problems of the Christians down the street neither builds up nor calls those people to repentance.

Paul states that God gave our leaders to “equip the saints for the work of ministry,” and “for building up the body of Christ” (Eph 4:11-12). Did he give us leaders to cut others down, or so that the community knows that we are the only ones going to Heaven? (This is how many view the church of Christ). God is the one true judge. Go and study the Bible with those people, but we should be just as willing to discover the Truth as we expect them to be.

Our attitude also should be in humility and love. Telling others bluntly that they are wrong will not bring others to the knowledge of the truth. Only with prayer (1 Tim 2:1-4), gentleness, patience (2 Tim 2:25), and love (Eph 4:15) can we reach the lost.

1 reply on “Dragging Others to Hell May Cause Burns”

Excellent thought! I had never thought about this before, but you are definitely right. We need to be extremely careful when pointing fingers because many times we forget that we are supposed to help others stay on the right path. We have no right to condemn others.